My eBook War Will Not Be Televised 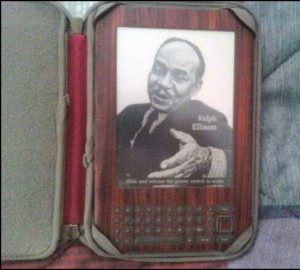 My newly cleaned bookcases are planning a revolt.  They caught me playing with the Kindle I received as a Christmas present and became enraged.  Though I was only doing Scrabble, which is one of the many games you can download, the fact that my fingers were pressing the keys was enough.

I get their anger.  I’m torn myself over the whole eBook rage.  I’m a walk into the library and spend an hour perusing the newly released titles type of gal.  Pick up the book to see the cover, crack open the spine to read the inside jacket flap, flip to the inside back to see an author photo, then read the opening lines.  I’ve never met a bookstore (yes, even the sterile big box ones) that didn’t have at least one book of interest to offer.  And though I had been half-heartedly investigating eReaders, the Nook is where I’d been leaning.

So, why is the time spent with my Kindle still playing games?  My bookcase project helped identify stacks of books I’d forgotten I had (and never read) as well as some gems I’ve been wanting to reread.  I’m torn with the idea of what media to buy if I want something new.  Do I buy the hard copy that will eventually fill up a shelf or the electronic version?  What type will I prefer to read?

Right now, I’m devising a truce if you will.   I’ve downloaded several of the free classics available on Amazon and started reading War of the Worlds via the Kindle.  In paper form, I’m reading Full Dark, No Stars.  Holding the Kindle while it is in the snazzy pink case helps a little with my yearning for the book feel.  And I can see the pluses of not having to struggle with flipping pages while working out.  Maybe I’m struggling through a war I don’t need to be in.  Who says that one or the other must win?  Maybe both can be okay in my world?

This entry was posted in Thoughts on Life and tagged Amazon, Amazon.com, eBook, Kindle, reading. Bookmark the permalink.

6 Responses to My eBook War Will Not Be Televised