Rants from an Idol Addict: Girlfight

Welcome to 2013 and Season 12 of American Idol!  Remember, fellow Idol addicts, there is no judgment here in the circle.  We come, we watch, we cheer and we cover our eyes.  Our first two shows this week rumble through New York City and Chicago to find hopefuls.

As we kick off audition show one, you can’t argue with the montage shown as Ryan Seacrest carries us through a voice-over of the success of past Idol winners and finalists.  Per Idol’s website, Idol alums have produced 356 number one Billboard hits.  Highlighting Phillip Phillips singing “Home” cements it.

While I admit to doing a “what the heck is this?” take on his coronation single at Season 11’s end, the tune has grown on me.  *gasp*  I now, right, since I ended up not being a fan last year.  I blame it on the Olympics as they adopted the song and played it as a rally cry.  Now commercials are using it.  Kudos to Phillip and Idol for having that huge success.  The Voice and The X Factor have yet to produce the success of the singers from American Idol.

This season, in addition to the run of new (and a few returning) contestant faces, we get the already media publicized, true diva versus pseudo diva battle royal of Mariah Carey and Nicki Minaj.  My alliances rest 100% with earned diva status owner Mariah.  She has the longevity, put in the work, made it out of a suffocating marriage, rose to the chart heights, survived a meltdown, made a comeback, got married again, had some beautiful kids and nursed and supported her husband in sickness and in health.  She has also shown respect for those who have come before her—something Miss Minaj could learn to do.

As we did last season, my initial posts kicking off this series will share some overall thoughts about the season’s start, any changes that I see and highlight a few “ones I’ll watch” that catch my eye.  From reviewing my first audition watch lists and those highlighted from the Hollywood rounds last year, I was on point in mentioning the initial potential seen in Shannon Magrane, Colton Dixon (only for all the pimping), Phillip Phillips, Erika Van Pelt, Heejun Han, Elise Testone, Deandre Brackensick, Jessica Sanchez and Hollie Cavanaugh, who all went on to be top 13 finalists.  Scoot over, Randy, so I can pull up my seat at the judges’ table! 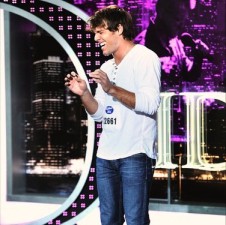 Next week, Idol heads to Charlotte and Baton Rouge where Mariah and Nicki bust out some tasers and switchblades.  Okay, I added that last part, but the nastiness sure feels like it is ramping up to that.

This is the point where you join in and share your initial thoughts.  Are there any faves that stood out for you?  Any pimping going on that turns your stomach?  Are you as confused by Nicki’s ever-changing hair and voices as I am?  Isn’t Keith coming off as a sweetie?

8 Responses to Rants from an Idol Addict: Girlfight