Rants from an Idol Addict: Hurray for Hollywood Week!

Posted on February 9, 2013 by Barbara McDowell

Since we have double recaps hitting this week, swing over to Surviving the Butchers of the Final Auditions if you need to catch up on the final wisps of the initial audition rounds.

Oh producers of all things American Idol, I beg of you to tone down the narcissistic-like ramblings at the judges’ table and focus on the contestants while in Hollywood.  We start off this week focusing on the boys.  Ryan Seacrest tells us that the girls are up next week.  The first round is 10 guys coming on stage, singing a capella and several being given the hook as necessary.

In typical Idol fashion, it is one big drive-by with some mentions of contestants that received initial audition round camera time and sound bites of others with no names.  None of the extended moments we hear standout, which has me wondering if the male voices are again weak this year.

My main problem with this first Hollywood show is that I don’t know who the majority of the men are.  Why?  Because the Idol edits failed to show their first auditions.  How does a contestant build a fan base when you give them no air time?

It is funny to see the guys that make it past the first round starting the process of lining up their group options—as if there won’t be a twist.  This year, the rules are that contestants will be put in groups with no choice.  Once in the groups, they are not allowed to make switches.

Wee!  This is very different from seasons past when some element of choice remained.  Now you know the producers are going to stack some drama into these picks via putting clashing personalities together.  The bonus I see is some fabulous all-male harmonies will soon be upon us.  There are so many names whizzing by that I’ll capture the ones I can.

Funny thing is the others in the group, who “know” the song, stumble over lyrics.  Then Josh Stephens, when cut, blames it on his help of Lazalo yet again and has the nerve to “congratulate” Lazalo by telling him it might as well be him (Lazalo) going through since they spent all their time working with him on what he needed to know.  I think the karma fairies already extolled a lesson on Josh.  It is now time for him to step back and learn it.

The rules tonight are that contestants sing their solos and the judges will be cutting after every eight sing.  Some are letting the stress zap their brains and Nicki’s comments are at her brutal best.  Carry on. 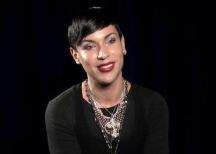 The most fierce award this week goes to JDA (seen at right).  You better work.  Even faced with the negativity of Trevor Blakney on Wednesday’s episode, he keeps his focus, offers words of encouragement and then performs with energy (and the correct words) to be allowed to the next round.  I’ve got nothing but love for you.

As the episode ends, all 28 remaining guys are called out onto the stage and told that eight more will be cut, after the girls perform.  I’m wondering if these will just be straight out cuts or if they’ll have all the contestants go to Las Vegas.  Once there, they might do more group rounds or final sing solos then do the long walk to talk to the judges and see if they make it to the live semi-finals show.

We get promotion for next week’s all-girls Hollywood time and the voice over tells us that there will be a slew of the “best performances we’ve seen all season.”  The conspiracy theorists are already swarming the Internet with stories that the producers edited the guy’s hours extreme to skew them as lazy and not as talented because they want a female to win.  This pre-praise of the ladies will feed that fire.

What do you think about the guys’ auditions?  Did the judges get it right?  What’s your take on the conspiracy theory on a push for a female winner?

5 Responses to Rants from an Idol Addict: Hurray for Hollywood Week!