Rants from an Idol Addict: Surviving the Butchers of the Final Auditions

Posted on February 9, 2013 by Barbara McDowell 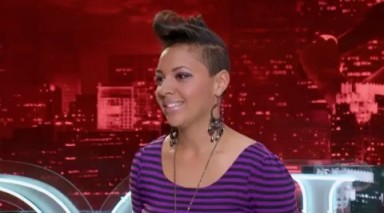 Squeal!  We survived the last week of auditions.  Well, most of us as we’ve already had our first DQ contestant of the season (more on that below).  I can only pray that Nicki will be toned down when we get to the Hollywood rounds.  Wishful thinking?  Full on delusions?  Well, this is American Idol.

Ones I’ll Watch from San Antonio

It reminds me a bit of Adam Lambert.  Mad talented vocalist that delivered some of the most beautiful moments I’ve seen on the show when he emoted, yet the majority of the time we were accosted us with ear blasting turns.  Singing a song full on blast the whole time is a bit much.

Ones I’ll Watch from Long Beach

Ones I’ll Watch from Oklahoma City

Fun fact:  Who first sang Nate’s audition song on the show as one of their finalist performances?  Cutie-pie and Season One runner-up Justin Guarini.  He is the first Idol contestant I wore my fingers out voting for and I feel the pop star fame he could have spun from the show was stunted by the limiting rules at the time.  Idol forced him into doing a dreadful movie with winner Kelly Clarkson.  The contract also prevented him from accepting any outside offers, which killed a standing offer to play the Emcee in “Cabaret” on Broadway.

The release of his album was also was sidelined behind the winner’s so when it did come out, there was no remaining “hot” buzz and fans around him.  Idol rectified that rule in Season Two and profited by putting runner-up Clay Aiken and winner Ruben Studdard’s singles out at the same time.  Justin has done well performing in theater, releasing some jazz and acoustic music and getting married and starting a family.

Back to the potential Idols of the moment and time for some awards.  The first “liar liar, pants on fire” award for the season goes to Matt Farmer.  Turns out he wasn’t injured and sent home from Iraq by an IED exploding.  Nopers.  He shipped home once found seizing from taking acne meds with alcohol.  Word is the meds were unauthorized.  Several of the men he served with stood up and called out this faker.

The award for most butchered audition goes to Zoanette Johnson from Oklahoma City’s auditions.  What she does to the National Anthem is criminal.  She mewls and mauls the notes, contorts her body and then drops it low.  In a dress.  She gets a golden ticket.  The end is near.

What say you, fellow Idol fans?  What group song choices do you think will turn up during the Hollywood rounds?  Do you think the talent pool this year will favor the males or females?  Anyone you are rooting for already?

2 Responses to Rants from an Idol Addict: Surviving the Butchers of the Final Auditions